For Chef Angus An, the path to owning four restaurants in Vancouver took a remarkably prestigious route. He graduated at the top of his class from New York’s French Culinary Institute, immersed himself in French and minimalist cuisine in Montréal, and then moved to London where he worked in a series of Michelin-starred restaurants and began exploring Thai cuisine.

Today a visit to one of his restaurants reveals a chef who has made his own Thai-inspired mark on the Pacific Northwest with his restaurants: Maenam, Longtail Kitchen, Freebird Chicken Shack and Fat Mao Noodles. Settle in for a taste of his food, and you’ll soon realize justhow much his training has influenced him. Yetat his 24-seat noodle bar, Fat Mao, and quickserve Freebird Chicken Shack, Chef An proves that you can produce some amazing food in a small space when you use the right equipment. 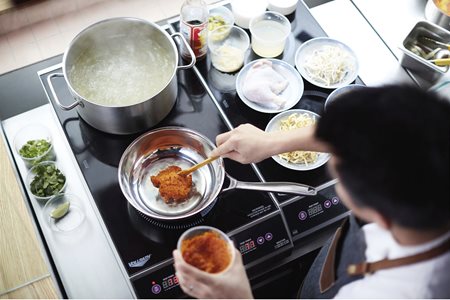 In both locations, Chef An turned to induction technology as a way to save space and reduce ventilation and electrical needs, but he is also impressed with induction’s performance. “One of the key things I like is the portability,” he notes, explaining that his staff does a lot of catering events and sees other restaurants who are using butane that runs out halfway through the event.

Chef An notes the cost savings didn’t stop at his restaurant build-outs, which were thousands less than restaurants requiring a grease hood ventilation and extraction would have been. He also saves monthly on energy bills –for natural gas because the kitchen doesn’t heatup as it would with gas ranges going all day.

Induction also solves many challenges that come along with tight spaces. “We have four small restaurants, but they’re very busy. So there’s a lot of prep constantly being done, and space sometimes becomes an issue,” he notes. With the portability of induction, the team can set up a stock, for instance, and let it simmer in a corner instead of taking up key counter space.

At Fat Mao, Chef An uses induction to slowly simmer pork bone stock overnight. “I used toworry when I left a stock overnight on a gas stove –it can dry out or over-boil and become cloudy,” he says. With induction, however, he has the control he needs. “If I’m not there I can write recipes that call for holding a dish at a specific setting for a specific time –it’s that precise compared to gas,” he says.

When asked if he had any doubts when adopting induction, Chef An admitted he was a little hesitant to consider an induction wok. “Wok cooking is something where you typically need intense heat very, very quickly, so I had doubts when I first tried it. But with the induction wok burner Vollrath designed with turbo power, you’re able to go from 20% to 100% power with one touch. ... the whole wok heats up very evenly.”

He discovered the wok has another key advantage over a traditional wok on gas heat. With an induction wok, the heat is better balanced due to the ring of magnets around it, so it doesn’t have the center hot spot experienced with traditional woks, which can cause burning. 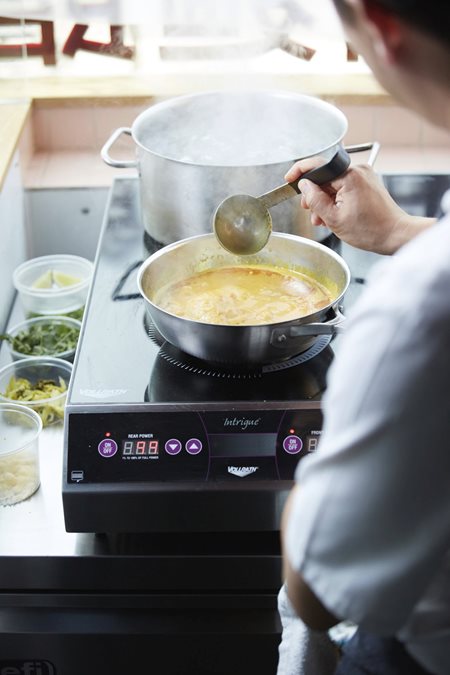 While he has been using the technology for a decade, Chef An notes that induction has gained in popularity over the past few years as chefs learn the benefits. “Some of these chefs started using induction in the last few years, inspired by the induction-only kitchens at Michelin-starredrestaurants in Europe,” he says. “Compared to traditional French piano tops, induction cooktops are a different world –they’re more efficient, cleaner, safer, and more consistent in the kitchen.”

For a chef who’s busy balancing four highly acclaimed restaurants while also catering events, induction provides the flexibility he needs to share his love of Thai food throughout Vancouver